Jones Descendants at Gathering in 1903 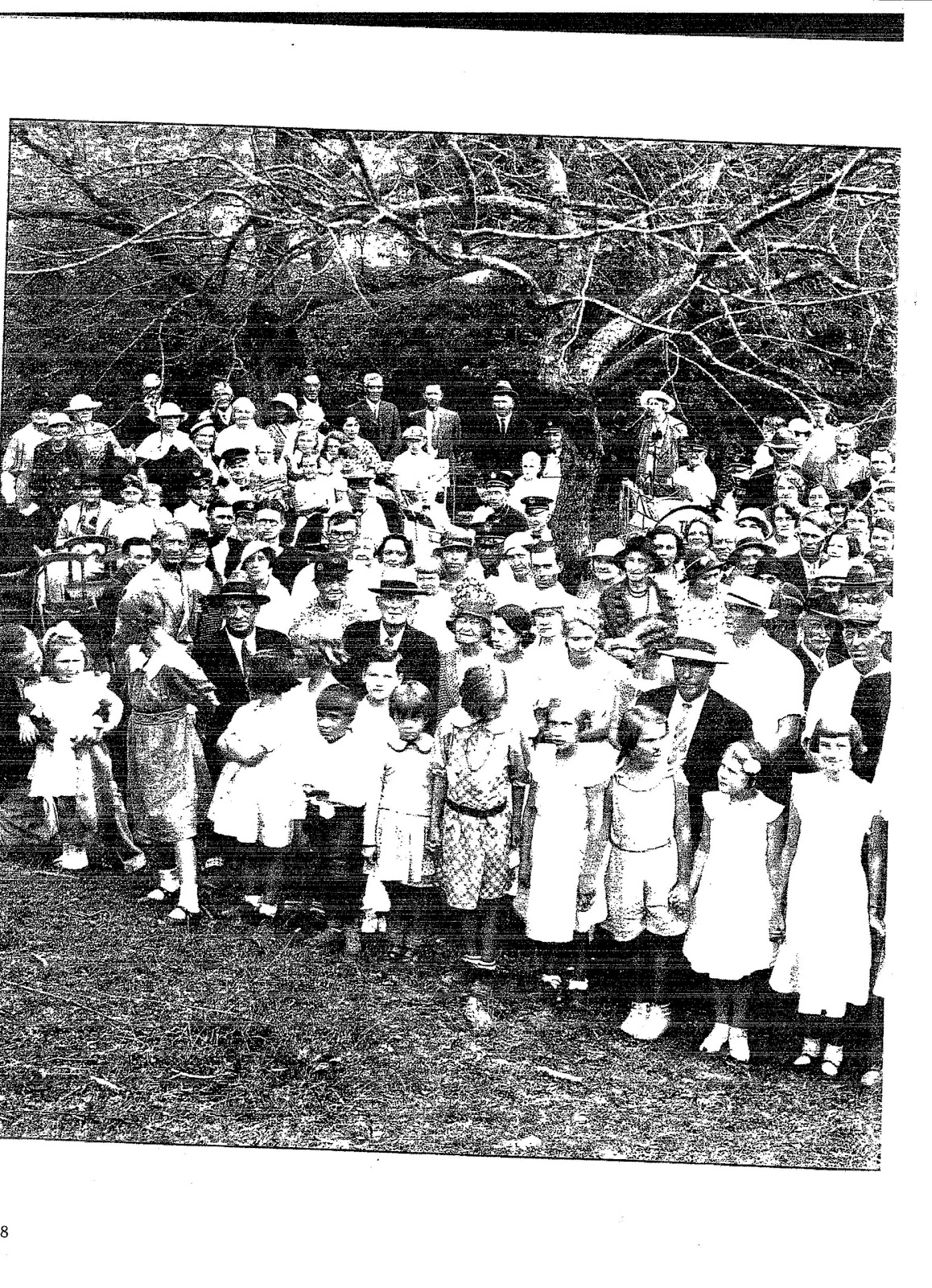 This was at a family Reunion for the JONES family in NEW YORK. Sept 1903 Volney JONES home
Aurelius, Cayuga County, near Fosterville. 3rd of Sept. 1903.

Volney is son of Noel JONES b 1813 Petersburg, Rensselaer Co. NY.  It is NOEL's 90th Birthday.
Noel's father was Archibald JONES m to Prudence Smith, lived 20 m east of Troy.
Noel is the Grandson of NOEL JONES whom married a Whitford.
According to my records that makes him the son of Silas Jones and Susanna Sweet JONES.??
Still looking for my NOEL's father?  b abt 1785 in NY  whom is related to all these people. YDNA verified. Family records verified but actual parent a blank. Grandfathers letter to Grandson did not mention whom the Dad was.

Any help appreciated. Thanks Melanie for this help.


Posted by Susi's Quarter at 10:24 AM No comments: Links to this post

Since I have decided to ask for some help on this lineage, I am going to post some data here.

I would love the family of this man to locate the pictures that hung in Hazel Gritzner's hall in her home
in Iowa. Grandson had no idea who got the picture of NOYES and SUSAN JONES from his Grandmother's.

Noyes Jones was born in 1809 according to court records in Petersburg, Rensselaer Co. NY in court minutes. Tombstone shows 1808.
He shows on the  1810 census with his parents NOEL JONES and SUSANNAH (?) JONES.
Names were pulled from Court records in courthouse entry.

Susan Madison was born around 1818 in possibly Mass or NY or VT. Children all give different places.

NOEL born about 1835/7 Mass.  on 1850 census Petersburg, Rensselaer, NY (he did not come west)
Family says he dies in Mass as infant but he is 13 on this  census (yes a minor is called Infant)

Calvin Fay* b 15 May 1843 Rensselaer Co. , NY served in CW with brother Harrison, Nunda, ILL
for residence at time of service, moves to Nashua, Ia with family after war. marries etc.

Tombstone gives b and d dates.  In 1870 a George Madison shows up as a neighbor also from NY.

Noyes and Susan JONES show up just above them on census. They do not show up on the 1880 census.

I also suspect that the WILLIAM MADISON in neighboring county may be older brother.

Any help appreciated. It also seems that the JONES's always lived on borders and boundaries. A trait that remains until currently. Even Dad's land was border land, Sonoma,Marin Co. California.

Posted by Susi's Quarter at 9:13 AM No comments: Links to this post

A site I have used for more than 20 years.
The Pennsylvania Line recommended it long ago and I have ordered maps from them since the early 1990's.
U. S. Geological Survey topographical maps that accurately portray the complex geography of the nation.
USGS Libraries Program: Special Collections
To much data to put here go to the site and go through all the links.
Browse image of the 1886 Shoshone, Wyoming 30 minute series quadrangle (1:125,000-scale), Historical Topographic Map Collection.

A word of caution if your transcribing please let the deceased by gone a month at least, before you
post on the site. A few days is much to soon.

1 floor is  all Genealogy based books and maps and data.
Lots of data to share for genealogists. Great friendly helpful people too.

ResearchBuzz
Interesting site that everyone is talking about it.  It also says that  the Digital Library of Georgia
has announced the availability of Mercer Cluster Archive, an on line newspaper for Mercer University's Macon campus. 1920-1970 time frame.

Posted by Susi's Quarter at 9:45 PM No comments: Links to this post


This week has  been busy with reading, gathering, sorting and attempting to sort out what may be worthy for my Classes.  It seems there are several new blogs, several new places to search and other assorted sources to utilize.

Having read a couple of tips for improving the Genealogy Tree for family to enjoy and make presentations more interesting.

Here is one:  Use Google Maps To Track Your Ancestors Travels ~ Teach Me Genealogy

The idea you can set down on a graphic map in your computer system the places your family have lived and it will show the migration of some of the lines as they take place, is to me very exciting.

Today on Facebook someone was trying  to find a town in Russia, I wonder if this site might not help them and we should be aware of  it anyway.  From Russia with Faith and Hope. | Indiegogo

Thanks Nick  from Belgorod, Russian Federation.  Also if anyone can help please let him know.

Now a new found place to look for data in the New England area of the USA, try this site, several I have sent link to are having success,  especially in New York region.

Even an AP for the I phone, I Pad,Pod has been released to help people with Jewish Surnames.
It is called FambleThe game can be accessed at: http://itunes.apple.com/us/app/famble/id543534434?l=hu&ls=1&mt=8

Also Huntingdon Library has opened an exhibit about the Civil War that we should be aware of.
Major Civil War exhibit opens at Huntington Library in San Marino - Pasadena Star-News
Posted by Susi's Quarter at 5:29 PM No comments: Links to this post

Shirley is a New York born researcher with many dead ends in New York.  She gave a great talk at
the Lemon Grove Library Wednesday evening. Sharing many urls for researchers to use to help break their brick walls.  Url's shared below with her permission.

The New York State Archives Cultural Education Center on Madison Avenue in Albany. There it cares for and provides access to more than 130 million documents that tell the story of New York from the seventeenth century to the present.
http://www.archives.nysed.gov/a/about/index.shtml

Where To Get Copies of Birth And Death Certificates In NYS
http://www.health.state.ny.us/nysdoh/consumer/vr/brthdth.htm

Where To Get Copies of Marriage & Divorce Certificates In NYS
http://www.health.state.ny.us/nysdoh/consumer/vr/marrdiv.htm

A commercial site dealing in New York State history as well as genealogy books. Also has a page of New York State genealogy societies and other helpful resources
http://www.hopefarm.com/geneatop.htm

And not to forget my friend's site :


Posted by Susi's Quarter at 8:09 PM No comments: Links to this post