Putting together a collage of pictures in memory of Mom.

Dorothy (Mom) was a Mtdna T1.  Now that is new for posting. Will have further tests done soon.

She married Ray Dee Jones 3 September 1938 in Wheatland, Wyo. I saw  it in register, then, we could not take pictures, her brother Uncle Dick, was with Dad and I.

They lived in Wheatland and he worked for Morris Thomas and she was an assistant in the house preparing meals for the cowhands.  He was hired away to the Diamond Tail Ranch in Greybull, Wyoming, where later I was born.

We lived there for 2 1/2 years of my life before we moved to California. It was close to 3 years.

Mom's health was precarious due to crippling Arthritis diagnosis by Dr. .  Dad was offered a job on his sister's ranch in California and the Doctor thought it would help Mom. We arrived in Petaluma, CA and Dad worked on OLLIMAC DAIRY for his brother in law Comillo Morelli.  The war was raging and Uncle had trouble getting milk hands due to draft.  Dad was color blind and if another draft had been called he would have gone but the War ended.

My sister was born while we lived here before our move down the road to larger  home and Uncle needing space for his old employees to come back to work. Dad then worked for the Moretti's.
Mom helped the Mrs, candle eggs and Dad did Diary work again.

Later my brother Jr was born, he and Mom were both ill so I was learning to make pancakes and do toast and other chores in the home.  Dad helped and during the week had a high schooler come in to help in the early mornings to get me off to school and siblings cared for.

After forging a close bond with all these neighbors, yes they were like family since ours was basically in Wyoming, Mom and Dad looked for their own home.  Many of us still communicate today even though the older generations are gone.  We moved 20 + miles away near the coast of Bodega Bay.
Mother loved that the ocean cooled the land in the evenings and fog would quiet the sounds.
She never liked town or city living, though she tolerated it when she had to quite well at times. She loved to hear the buoy in the bay.

My youngest brother was born while we lived here.  Again she was very ill and Dr's did not expect her to live.  By then I was cooking, cleaning, sewing and doing major farm chores. Mom started me with genealogy at this time while she was a bed. 12 Years between baby and I.

I was in 4-H and active in school activities, as were my siblings.

After marriage, moving around several times and children growing, our children went back to spend summers with their Grandparents.

They visited us in LeMoore Naval Air Station, San Diego's various bases and came to Hawaii to see us.Then we were stationed back in San Diego until retirement, which put us close to Dad's brother who was US Navy and about to retire. ( another story)

Mom died 10 Jan 2011 in Valley Ford, California the home of her choice a hundred times over.
We were blessed with her living with us for several months after our 50th Anniversary. So Great Grandchildren were able to also get to know her better. 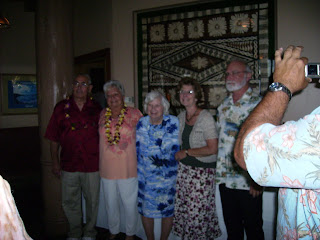 Our Anniversary my siblings minus Dale. 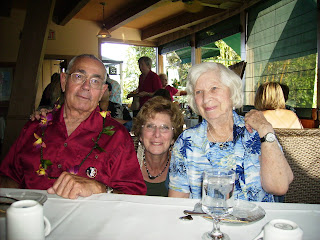 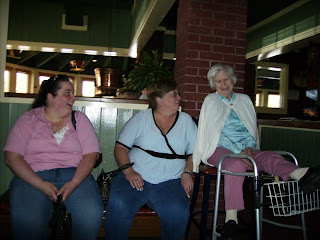 Jennifer, Anne and their Aunt at Applebee's. Petaluma, CA She loved to eat here. Just out of hospital. 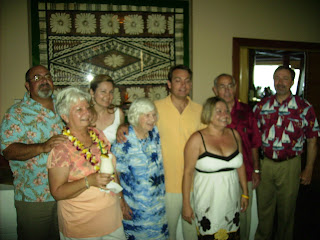 Our children with Mom and us. 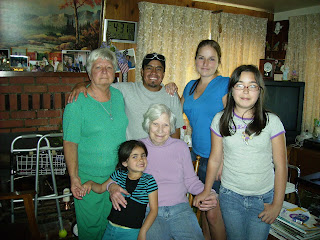 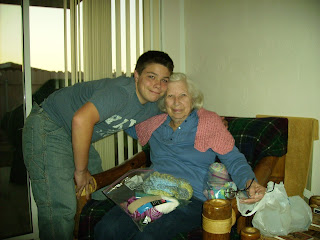 Zachary with his Great Grandmother in our home. 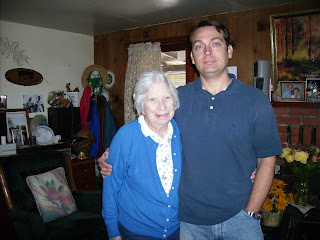 Our youngest with Mom at her home. 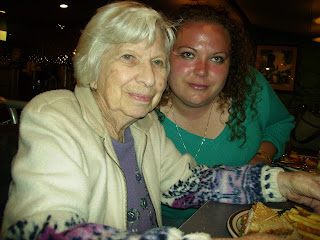 Niece and Mom while we were at lunch.


Posted by Susi's Quarter at 3:28 PM No comments: Links to this post

Michigan Sadness, Their Loss of their Trees Seen by Susi Jones Pentico

My family became Michigan Residents a few years back.  My what a beautiful State.

First exposure was February 8 or 9 years ago, for 4 months, while family was experiencing a
medical situation within the family.

Yes, it snowed the day after I arrived. What a thrill for me.

Trees at this time are asleep regenerating in their roots for a new spring that is coming up.
So they are quiet and asleep. 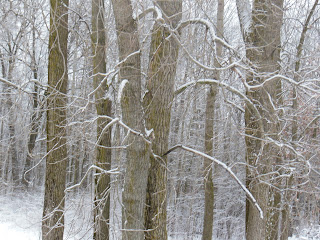 Having flown back many times since, and learning the new job my family is involved with was fascinating and heart breaking.  I am a tree lover.  Trees do so much for our living here safely.

Ever hear of the Emerald Ash Borer?  It has decimated the Ash Trees beyond belief. It has affected many states beside Michigan. It has spread down to the Tennessee border and west to Virginia over to Iowa and Wisconsin, Illinois and Indiana etc.

Signs were put up stating " DO NOT TRANSPORT FIRE WOOD".  People did not heed so it spread from Canada and Michigan and the upper states down to now the middle west.

As I fly across the country and see more and more tree loss it breaks my heart.

Because many read my blog it is my hope that people will stop transporting the firewood from one area to another and spreading this bug.

Where lush trees stands stood and deer and nature could hide from man, it is gone.

Here is some of what I took this trip. 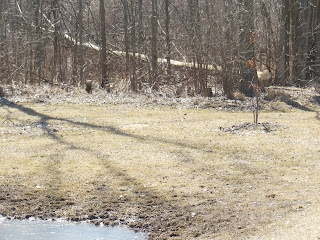 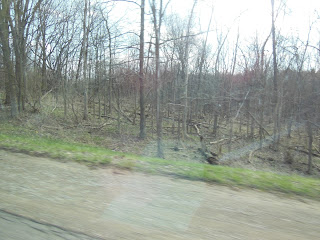 Some are near the road some are falling on the roads and crews have to watch to remove them.
The upper picture was a thick are of various trees where many animals were hidden from man.
Now you see few animals because there is no coverage.

I am pleased to have a family member involved in attempting to slow down and maybe some day
stop this devastation.  Where it was once a couple of states it now covers way to many.

It picks old trees and young ones.

It reminds me of the Beetle we have destroying our Oaks in California.  So mid westers  pay heed please.

We have other trees about wiped out such as the Chestnut Tree.
Posted by Susi's Quarter at 8:53 PM No comments: Links to this post

Married: Katherine Kerns,  1863, foster daughter Elsie Donaldson lived with them. Then with Calvin after her (Katherine's) death.

Elsie Donaldson marries at Calvin's home to John Miller between 1901 and 1905, last seen in Independence, IA,  in notes.

Children with Maude are:

*At his time can find no connection to my PLANTZ on Mom's side of family.


IF you have more sources and information please contact me.

Sources for this information.

Would love to hear from some of these family members.

My cousin Charles sent me some of this information in 1984 from Nashua, Iowa.
Trusting cousin C will come back with more information after her trip home.

A Great Family Eatery Was Found, Road Trip for Dakota

A Great Family Eatery Was Found,  Road Trip for Dakota

My son and I ventured west to Plainwell, Michigan to pick up a beautiful rabbit for the
family's use.  He is beautiful fun and playful, Black and White splotched.  He will jump out of the
cage into your arms or shoulder if you let him.

On the way home we stopped in this very neat small town named Bellevue, Michigan.  We
stopped on the way west there and filled up with gas there going home.  We then asked a local where a good Eatery could be found.

Riverside Cafe, he said just across the river to your left.  That gentleman was so right. The homemade food was excellent, the atmosphere was homey and the people were friendly. Home made pies 7 varieties that day, no we did not try one.  But should have brought one home for dinner.  My meal was some of the best Liver and Onion's I have eaten in many years.  My son's food was ever bit as good.

He say's MOM for L and O it doesn't stink.  I then remembered he was not a fan of my meal. But it did not make him ill smelling it so he said it really must be good.  The menu was so down home and not to expensive but worth what we got.  I would say there prices are equal their food.  Choices like Meat Loaf and Gravy,  Steak and Eggs or Steak Dinner with Veggies and Potatoes, Home made Mac and Cheese, (would love to try that one sometime), Roast Beef with Mashed and Gravy, and the list goes on.

Here is a picture of the inside of the Cafe, so much picture memorabilia & family pictures hanging around. History of some Baseball person on the wall if I recall.

The river you could hear rushing down the way and I took a picture of the white caps the water was generating as it flowed so swiftly away. 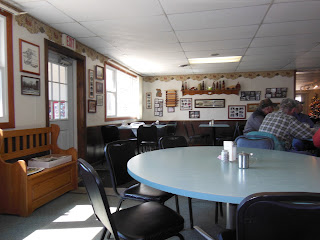 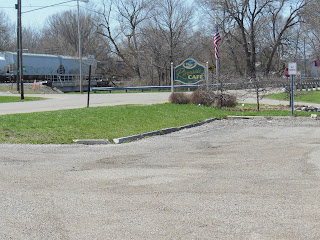 Posted by Susi's Quarter at 6:45 PM No comments: Links to this post

Jones's, Where Art Thou?

Jones's, Where Art Thou?

Looking for descendants of Silas Jones Sr of Rhode Island to New York via Dutchess County,  New York.  Recently learned the living in Dutchess prior to Albany then Rensselaer Co. (formation) by 1790 and suspect prior to 1780.

Noyes JONES comes in variants of NOYCE, NOIS, NOYES and maybe other spellings.

Trusting in someone's JONES files is a message of whom NOEL JONES born about  1785 parents were.

I have tracked from youngest child to the three oldest of Silas Jones Sr. and am fairly sure that the parents were either: Abel, Ruscom, or Noel.

Noel, Susannah and Noyes are in the 1810 census.  Never found again, looked in NY and Mass.

Many researchers have implied may have died with the flu epidemic in 1811-2 in that area.

Abel JONES census data shows an increase of child of right age to be Noyes in 1820, 1830.
Abel's passing is after Noyes would be of age.

After their marriage and prior to their moving to Illinois and then Iowa, I have a good handle on (births of children) events.

One son was supposedly killed prior to their leaving New York. Have not found a thing on him either.

Posted by Susi's Quarter at 10:06 AM No comments: Links to this post

Loving Moment with a Dad, Happy Father's Day to All Dad's. 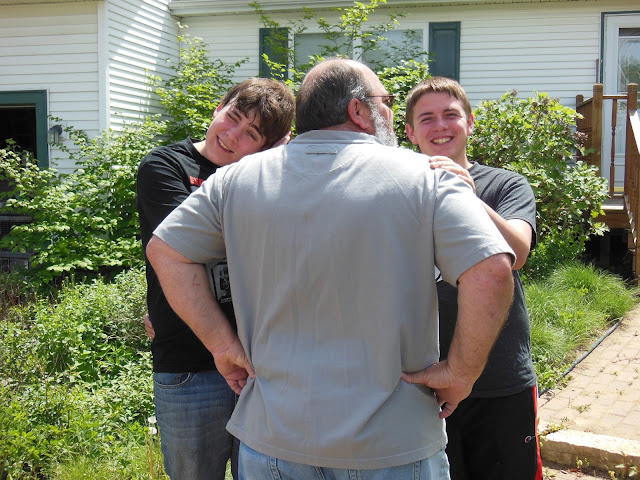 Posted by Susi's Quarter at 12:05 PM No comments: Links to this post

Such fun was had by all and the sharing was phenomenal.

Having attended at least two sessions each morning or afternoon, meet and greeting old friends and acquaintances.

My Heritage solved my problems on line and renewed Geni.com for family to use on line. Interesting now they are joined.  Not sure if I will retain both for self yet. To soon to tell for that. Daniel H. thanks so much for the rescue.

Alas, Ancestry was so swamped on Sunday we never resolved my problem even though I went early in the morning. They had a super busy day Sunday.  Will try on phone again if possible. Never seen their booth so busy as Sunday.  I gave up at 2 pm. Was due to catch train home a wee later.

I am posting the events I attended over on my working blog for Researchers. I have yet to post Sunday, gee it is only Monday.

Worked the SDGS booth with Diane Lott and Ken Robinson and Virginia Taylor at different hours of the three days.  Looked like we moved a lot of books. Of course I had to acquire some also.

Here is Virginia and Diane at the booth. 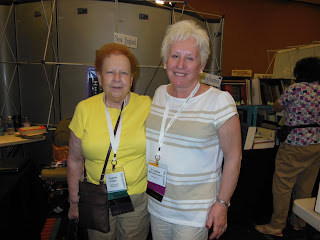 And here is the group at dinner. 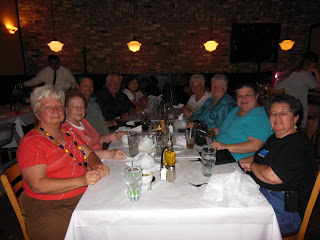 Posted by Susi's Quarter at 8:56 PM No comments: Links to this post 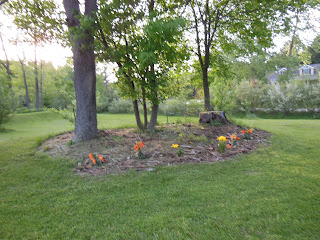 Posted by Susi's Quarter at 10:13 AM No comments: Links to this post