A Bit of Lineage to Share. By Susi Jones Pentico


his father  John Haynes b 1495  Much Hadham Hartfordshire, England

Mystery Grandma of our Past.

Okay taking your hints I went to the tree again.  I suspected she was from Sr Henry's wives.
But Catrouch/Catherine Fry died 1845.  She was my biggest suspect.
We learned she may have been married to Fredrick Loughman /Loafman after Henry's death and
I recently learned people are carrying a very different person.  More digging to do on this if time    permits.

So dropping down a generation
To be a Grandma it had to come from Sanford's line.

He married Rachel Plants/Plantz  their marriage date was on papers Currier and Ives Document that accidentally got left in house with brother.  We have many pictures of the Plants and Hoffman', Huffman's of this line.

Rachel Plants, Mom was Catherine Stollar she was born1801 and d 1893.  But the picture sent me of her does not match this lady. Her MOM was Rosanna Ealy/Ely, Ihli.  Lost much on this line when system crashed.

George Plants, Mom was Catherine Haines need to learn her death date. Was in old system before it crashed.


Not many to choose from so interesting if anyone has pictures of the potential matches to the picture.
Ely, Ealy, Ihli, Haines, or Stollar.

Unless there is more behind the story of the Senior Henry having another wife prior to Prather/Pravotor or Fry.  Since that daughter was not determined to be Henry's but Prather's?
We are lost and she would not be a Grandmother.  I personally suspect that the daughter was Henry's but still would not make her the Grandmother.

Picture on previous blog.  Look in your old pictures do you also have her picture someone that looks similiar.  Thanks.

Posted by Susi's Quarter at 10:05 PM No comments: Links to this post

Who Am I?? Cecil Lee/Leroy Hoffman stated a Grandmother Way Back 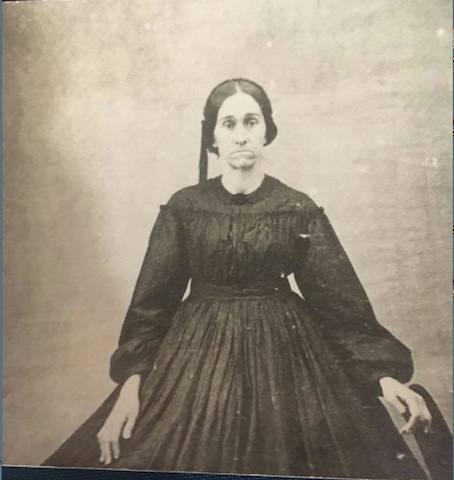 So I sent this again to Maureen Taylor for information on age. This a m, cousin and I blew this picture up.  She has a rose pin at her throat. The material of the dress is embossed? stamped?  It appears she has long hair and is braided and wrapped around head?  She has fingers very long and arms very long, much like my Mothers.  She is standing with hand on back of chair. She is not short.
Her waist above back of chair.
Does she have knees bent a bit?
His Father told Franklin she was of Indian heritage. Franklin, his father Sanford. CW Vet.
She has tobacco/snuff in cheek, His Father(Franklin) explained to him (Cecil).

Mother Dorothy Inez  Hoffman (Jones), Father Cecil Lee (Leroy)Hoffman b Ia 1891, Grandfather
Franklin Marion Hoffman b 1860  Greene Co. Pa, {Aleppo area}Died Wheatland, Wyo, buried in Iowa beside his wife, body went by train escorted by son Cecil Lee, (my Grandfather).
Grandpa Frank was a large man tall 6"3 or more. Wide shoulders, went in doors sideways many times. I have a picture of him blocking a doorway. He walked the cattle (animals) to IA  from Pa. behind wagon, with younger siblings help, after the CW. Someone in family has the records he wrote of it.  Younger children helped keep track of chickens and dogs etc.

His Father was Sanford Huffman/Hoffman, served CW and cousin sent me his Medal,  born 24 Nov 1834  married Rachel Plants (Plantz)   Her mother was Catherine STOLLAR 1801-1893. Anyone have picture of her?  Two generations back would be: Catherine Haines and Rosanna Ealy/Ely (Ehli).

Sanford's mother was Elizabeth Higgin's and I have picture of her young and older.  Married 9 April 1826  Greene Co. PA to Henry Huffman/Hoffman. b 1803-1879.  Brethen. Built bridges, barns, churchs, schools and farmed. Sold fruit etc. Also built the first free standing spiral stair case for a family member. It fell about 1991.  I have newspaper article.

His letter passed around family after the  CW stated why he changed name and it was because there were no HUFFMAN's in Germany prior to 1880. They were all Hoffman's.  Teacher told his younger children and he then wrote and shared with family.   He was also tired of getting other peoples mail.
The younger children went generally by Hoffman, Sanford changed his over time to Hoffman.

I do not think it would be Mary Pravator (Prather) though she did have a girl child, implied by him???   if her line found DNA would help.

Everything told me implied it was someone before Frank married so the Duvall line has been left out.
Thanks for any help.. SusiCP1@gmail.com, SusiCP@cox.net or contact Helen S Durbin or Matt C. at Heritage site.


Posted by Susi's Quarter at 2:51 PM No comments: Links to this post

My friend and my cousin, she convinced me that Greene Co., PA would be nice to an outsider.
So I was preparing to go east and meet all these people my Grandfather had talked about when he was alive.

My last visit 1958, with him he, Cecil Lee Hoffman, asked, if I got a chance for me to go to Greene Co. PA and meet the family his family left behind when they moved to Iowa.  His father my Great Grandfather Frank took him to Greene Co. just before he started school so he could meet his father's family. He was about 5 years old he said.  Now at this time, 1958, lived in Wheatland, Wyoming in town giving up the farm due to age and healthy a few years before.  He left Iowa to go to Wyoming because of his lungs where he had kin living before MOM was born pre 1920.

His father  Frank, walked the cattle and animals behind the wagon when they left Pennsylvania to come to Iowa.  Frank's father, Sanford Hoffman,  had been in this area during the Civil War and after the war they moved to Iowa from Greene Co. PA.  He had a brother who was learning to be a Dr and he also had a brother in law, Thomas Neal, badly injured and needed more treatment so they moved to Iowa. So there were at least 3 wagons in this trip and I think it was about 12 wagons or so. Still trying to track whom all came with them.

Anyway, I had written to the Library for assistance on locating kin and they put me in touch with Mildred Russell.  What a treasure she was.  Alas she got the flu then pneumonia and died so I postponed my trip for another year, in hopes of developing a friendship with other kin.   I talked to her when she went to hospital because she called to let me know if I couldn't reach her where she would be.

So the next year after contacting her sister and other cousins, I flew east to meet the family.

I was sad she wasn't there but the family was awesome.  I understood why Grandad Hoffman wanted me to make contact with them. He tried but was limited on how to find them.

So Dear Mildred, Thank You so much for all you helped to start and complete.

I will write more on family I met while there and some I still hear from and one I especially work with.  Blessings All.

Posted by Susi's Quarter at 10:30 PM No comments: Links to this post

Stumbling Around in the Trowbridge, Sharpe, Wood files.

Stumbling Around in the Trowbridge, Sharpe, Wood files.

Well, Grandma gave me some of my Sharpe, Sharp, data and in the 1970s it was the best I had.

For some reason today as the heat piles on this evening and the breezes die down I m setting
here trying to make sense of a hint I received from Ancestry.com.

I have Prosper Trowbridge 1808- 1850 m to Margaret Sharpe, I seem to have lost some files when back  up system went 4 years ago.   For her I have John Sharpe as Father no mother  but born NY

She is my ancestress:

More information on these lines.   I wrote my Great Grandma for 6 years before she died the year I graduated high school in 1958.  Margaret Mae Eastman her daughter

Posted by Susi's Quarter at 5:13 PM No comments: Links to this post

HAVING WRITTEN ABOUT THIS FAMILY LONG AGO, GOING TO TRY IT AGAIN.

Earliest  I have is John EASTMAN b 1579 supposedly Roger EASTMAN's father.

Posted by Susi's Quarter at 5:08 PM No comments: Links to this post