Jones Blathering, tidbits here and there.

1 Jones Tidbits and confusion yes -no.

3.  Not before nor after. to be found Noel and Susannah JONES -- Noyes Parents.

5.   Noyes Jones is sometimes spelt NOIS, NOYCE.  And maybe even NORRIS.
A marriage record of a son claimed him as NORRIS JONE wife Susan Madison?
This child was the last  born of Noyes and Susan and just before they headed to Illinois.

6.  Noyes  Jones and Susan are in Nunda, Ill when the boys enlisted in the Civil War.

7.  Unsure how many served, Have records for Calvin and William Harrison, still looking.

b. Data found unknown whom this is:

I know according to Mabel Hewitt's records some JONES ma SCRIVEN.  pages missing from report from Bennington Vt. Library.

9.  To confuse matters worse there is a Noel Jones who lived this region who went to Utica, NY with a son Noel b 1813. He worked as a shoe maker.  Born about 1785.  Found in Utica add in paper and Census.

10.  He then took son and went to Allegheny Co. NY.  Only those 2 were listed on census.

11.   This Noel JONES fits time for birth but not for child or wife or the fact he had multi wives and
was drugged at death and the current wife had him declared not stable at death but okay when changed WILL.  Recently I learned the Judge was her Uncle.  The daughter went to court to get it reversed and the Judge said no. HIs earlier children got nothing. The young young lady and baby got it all. I would think they should have been able to have the Judge removed and retried for interference.  Also I wonder if that child was his she was carrying due to his health situation.

His Dr even went to court to say this was wrong, Judge overruled.

12.  My records only show Noel with Noyes and Susanah his wife in Petersburg Court Records and then 1810 census.

Did they die from disease, War of 1812,  Can any one explain this misdirection of data.?
IS there a way to see if the courts granted this family in Western NY a re trial? I am finding very very scant records. Except that death mess and court hearing at FS records.

13. Noyes Jones last son was born 9 Sept  1850 in Petersburg area, His name was Charles Edward.
he married a Betsey Bartlett in Ill or IA not found records yet.  His second marriage was 1905 to Susan Lantz.  He died 1916.   He was old enough to serve in Civil War, not found any records yet.

14.  Noyes and Susan's daughters had husbands that may have served. Need to check them out also.

Arvilla  married two brothers Alfred and Addison JOHNSON.  I had full story on them before back updrive crashed.  When one brother died she married the other one.

Other Jones cousins do you have data to verify any of this besides the data I have.?  I have never heard that Henry George ie George Henry was married twice.  ????

Anyone find data on NOEL JONES b1835?

Did William Harrison Jones marry the day before they shipped out?
Posted by Susi's Quarter at 6:21 PM No comments: Links to this post

Being a major Facebook user,  it fills the gap from when we did the Golden Gate Forum and Joe's site afterwards.
I was born in Wyoming, Yes, I am a Cowgirl.  Yes, I love horses and animals and the country.  I love the green trees, the rolling hills, the steep mountains and all that in between.

If you want to learn a bit about Wyoming you may want to turn to Facebooks' pages on Wyoming through the Lens.

(5) Wyoming Through The Lens

I retreat here when all else fails.  Sure it may be cold, and windy at times but the people are really down to earth real people in every town or city  having been in for over 70 years. It has been 2 1/2 years since last trip but one is going to come up par summer time.

Relating this state, to much of what Michigan has to offer.  It is not over run by people. You have open space and lots of beautiful things to see if you just open your eyes.  Yes, both get snow and wind and in summer more wind and heat and lakes and trees and arrrgh a few snakes here and there. Those I avoid with a passion. It has the Oregon Trail running through it. It has ghost towns, ranches, mini towns and lots of socially friendly people.  The Ranch I started on The Diamond Tail Ranch is still in existence and has turned partially into a ?Dude Ranch. I was last there in 1958 with my parents as part of my graduation present. Greybull, Wyoming.

This state holds many of my families relatives but probably not as many as Iowa or Pennsylvania does.  Which brings in Facebook even more.

I have been able to connect with family I have met before, meet people I know of but never met, seen faces to put on names, shared data amongst each other, expanded our family trees many times over with the terrific help of Facebook.

Yes, I even found family on the Wyoming through the Lens page. The old story of leave no stone unturned can really be used on Facebook and it's many sites we can share.

While not going to put pictures from the pages here but take a bit of time, a cup of coffee or glass of water and set back and enjoy some of the most beautiful sites in America.

There are many historical places to visit and learn about our history. Laramie and Laramie Peak my cousin took me up to see. What a site to see so far out across our country. It was like at Yellowstone and I could see into both Montana and Idaho standing in Wyoming.

Lots of Cattle/ Sheep battles were fought here early, tis sad that they could not see both could get along.  Our Indian ancestors had lived well in Wyoming and were moved into Montana and S. Dakota.

A picture done by our  kin used to hang in the Hall in Cheyenne for the Governor.  Ancient prehistoric dinosaurs are constantly being found all the time.

It has some awesome rivers, the SNAKE being one. Old Forts, Laramie being put back to original state when our GGrandfather Sanford Hoffman was there for a bit. Dad punched cattle over that ground before the state reclaimed it. He gave us a good view of what it was like in the 30's etc compared to what we were seeing today. I think somewhere in the piles of pictures I have inherited there are some.

Do not forget Cheyenne Rodeo Days in July.  I have never been but Dad rode horses there as did my Uncle.

Posted by Susi's Quarter at 3:13 PM No comments: Links to this post


Ok, We are trying to name them all. I suspect boy on the end is Mom's little brother whom died later this year.  I am not sure Or his  G.Uncle Dan's boy.
Cousin Andrew Quintana shared this with us.
Harrison Scott,  another Scott,( is this John)  Uncle Roy Hoffman, Aunt Pat, ? ,  Grandad Cecil L Hoffman,  G.Uncle Dan?
G. Uncle Harrison's wife Elizabeth with Elizabeth and brother Warden in front.
Girl next to Uncle Roy unsure of????
Aunt Marie with I think her  two older boys,  Hartley and Eldon  ??
Maxine is this your Mom, Aunt Mae Hoffman  or Fern Scott Hampton. (Ella)
Grandma Inez Mae Scott in front of Grandad .
The boy next to her may be Raymond. ??? or Ralph Scott, Which means>>>>>>
This appears to be a Scott Family Reunion or maybe came for Raymond's funeral. He died in 1944,

>>>>>> William Frank and Beatrice Francis should be down front.

Can any other SCOTT identify these people. I know MOM could have. Ralph Scott also. Hoping Mildred Scott Larsen can or Dick Hoffman ( William Richard).Please contact SusiCP@cox.net or berdieda@msn.com 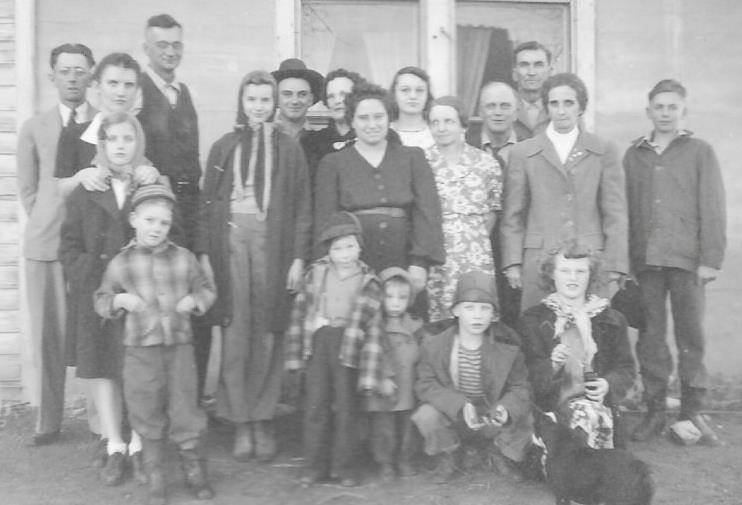 Where Do You Fit In? Mine Below

Randy Seaver asked  at Saturday Night Genealogy Fun? Where do I or you fit in?

Having attempted to resolve this issue, which I felt was very fascinating, the results are below.

Here is the url for you to have fun and read his challenge.

My Results are: Where do you fit into 7 billion? Enter your date of birth to find out:

When you were born, you were the:  from my birthdate.

Lots more  people since my birth.  What about yours?
Posted by Susi's Quarter at 1:48 PM No comments: Links to this post