Rachel Plants Hoffman and some of Children.

Rachel Plants Hoffman and some of her Children 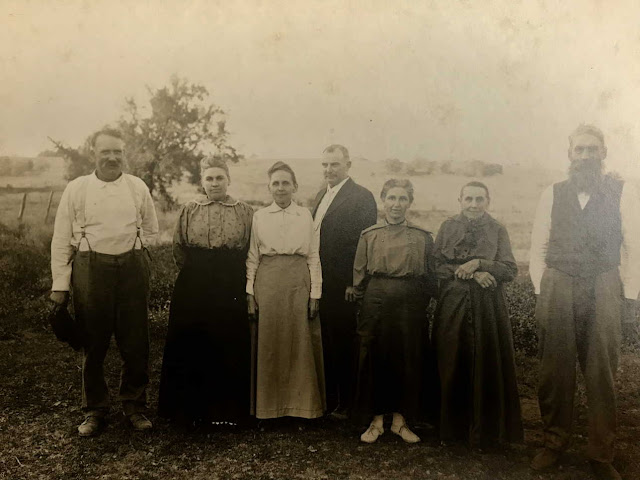 Rachel Plants (Plantz) Hoffman (Huffman) and some of the children.

Knowing that Elizabeth C and Harvey were school teachers and never married.  Jarvis Leroy b two years after Frank, married Melissa Stoops.  I have a history of them here somewhere.  One of the descendants used to visit Mom,  Ruth and we exchanged letters.

Great Grandpa Frank was beloved by my MOM and she spoke about him often.  Franklin married
Samantha Abigail Duvall of Greene Co area PA. First he helped his family move and he matured to be old enough to marry. He walked behind the covered wagon and herded the animals with little brother Jarvis help at times from Greene Co. PA to Iowa.  The younger children kept track of the chickens and other small animals on the journey.   Later after wife's death he moved to Wheatland to be near some of his children and died there  a few months before my birth. They wouldn't let MOM go to his funeral due to pregnancy issues.

He and Samantha had several children that I was told did not survive birth.  They had 3 living children: Robert Walden, Grace and Cecil Lee (Leroy) my Grandfather.

Not getting to meet these people in person but I knew many of these Great Aunts and Uncles, children.  I met all but two? maybe just 1 of Grandma Inez Scott Hoffman's line. I met Graces' down line when I was small and some we were very close to in California. Ralph Scott's ancestor.

We always went to Casper to meet the Hampton's and until most died I wrote to them.  Maybe two boys still alive but not heard from any of the girls downline since Betty died in Tenn a few years back. ( Jasper's children.).  His wife was a Scott also Ella Fern Scott.

The families were very close in many things.  I enjoyed meeting and communicating with them. Yes I have the names of their children. Funny how we loose touch with current generations.

Since Elizabeth died in 4 June 1891 Iowa this picture was taken before her death.  Rachel her Mom died in 1920.  Frank died 1940 in Wheatland, Wyo. but was shipped back to IOWA for burial.

Rachel loved canaries and made hats amongst other things.  She allowed no working on Sundays or money exchanges.  b 1836  Greene Co. PA - d 1920 Moravia IA.
She passed two weeks before my mothers birth in Wyoming.  Wheatland area.  Little Bear.