Ray Jones was born 19 May 1913 in Waterloo, Iowa.  He and his mother moved to Wheatland, Wyoming area when he was about 13 months old.  His father is listed in the 1910 census for Salt Creek,  Natrona, Wyo.  His father was Carl Fremont Jones and Victoria Mae (Ida) Foulk Jones was his mother.

Ray added the Dee to his name when he got his Social Security due to the amount of Ray Jones in the system. This was in the late 1940's or could have been early 1950's.

Ray and his younger siblings lived in  Wheatland, Wyoming and then Casper, Wyoming, coming back to Wheatland as a teenager. His family was split and raised by nieghbors and friends, except the two youngest girls whom stayed with their Mom whom then moved to Cheyenne, Wyoming.

Dad worked for Morris Thomas from the time he was 13 until he married and moved up to Greybull, Wyoming working for Howard Flitner at the Diamond Tail Ranch, in Greybull, Wyo.

Having always enjoyed the story he told of seeing Mom for the first time formally I never tired of.

He worked part time with her Dad on the Culvert (water ditch) for the area and often rode past Grandad's home after working, heading to his bunk on the Thomas Ranch and had seen Mom and her siblings from a distance.  One day after a hot day of moving water for the ranches crops he and his future Father-in-law rode up to the Hoffman homestead. The ladies were cleaning and preparing tomatoes (by large tubs full) to can for the winter months. Mom's sibling, Marie had a huge crush on my Dad and tried to impress Dad with her antics. She implied she could get a date from Dad if she washed Mom's face with tomatoes, which she attempted to do. Attempt is all I can say because Dad said Mom totally bathed her sister in tomatoes.  Mom was embarrassed and livid. (Mom was not near as forward as my beloved Aunt Marie, so she was very embarrassed)  After they cleaned up and served the men Lemonade, her father introduced his coworker to Dorothy(Mom).  Ultimately, the rest is history.
Their courtship had many rocky points because her sister did not give up easy but she never knew she was never in the running. Years later, I was with them when they all shared the story with me about the Tomato Fight Day. They all had a good laugh.  Aunt Marie had an awesome husband in her future, she just did not know it yet. 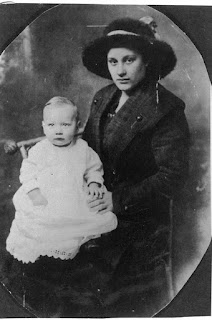 Dad told me he knew the first time he ever saw Mom out in the fields working with her Dad that someday he would marry her.
Posted by Susi's Quarter at 9:39 AM