Sunset in Valley Ford, CA with my tree. 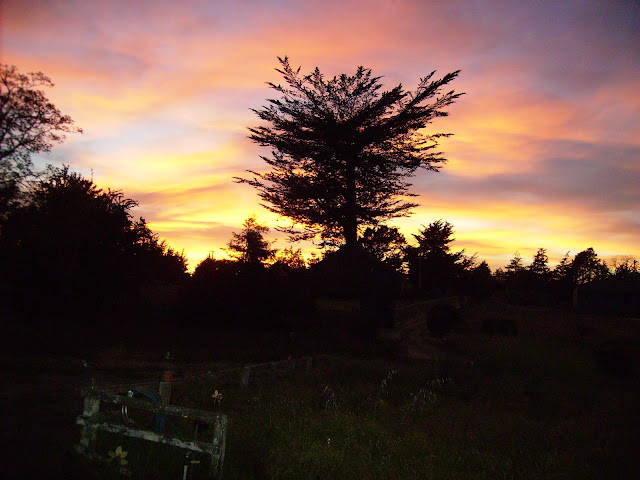 Years ago there was a long shrubbery of Cypress that made a wind block for the fruit trees in the orchard that is to dark here for  you to see.

But one year they finally said they were wore out and a fire hazard and they were cut out due to no longer living and dangerous.

As children we played in that hedge and run on the top of it playing hide and seek. When they were going to cut down the trees/shrubs one tree on the end was green and growing and I convinced Dad to let it stand. All these years later it was always my tree.

I visited that tree and really enjoyed the beauty of it, no idea now if still there or gone.
But Pete Merga, Alice Merga, Norma Bordessa, and other neighbors once in a while would come and we played in those trees that were cut like a hedge and made a great base to run on, on the top of the deceased trees.  Once we got stuck and had to have a neighbor come help us down because we played later than we had sun light to see our way down safely to the ground.

Other neighbors were Donna Maxwell, Jane Kirkland, Kay Cunningham, and others. I am still in touch with Norma Bordessa and seen Pete Merga at Mom's funeral.

Oliver Illia, was the son of Oliver and Mabel Illia which were close friends to our parents. He also came to the services.  The Del Curto's both brothers lived near. It was their grandmother that taught me how to knit the European method.  Her husband was a butcher at one time.

Of course back then we also had the Rossi's, McFadden's, Brown's, Titus, Caselli, Bianchi's and many others.