Yes tomorrow is the day, want to share with all.

Mom was a very special person, she was artsey, she could see a dress in store, go home and cut it out and make it. She drew beautiful pansy's, trying to teach me how to do it. She knit, crocheted, embroidered, and never mastered tatting. That she tried for years to do.

Mom was born 29 June 1920 at Little Bear, Wyoming. Just not far from Wheatland.  She went to school, with her siblings by walking along a creek to stay cool on warmer days.  One time she stepped on a snake thinking it was a twig. It wrapped around both of her legs and she was terrified of snakes ever since. She did kill one at our home once though because it was endangering  my brother who was a baby.  Yes it was poisonous.  Courage really helps in times like that. Sort a like a MOM thing. Or Parent thing. When child is in danger our fears disappear.

She did not finish high school she needed glasses to read the materials.  She would have been an awesome teacher.  She married her love of her life and had a family.

She loved to garden, cook, & bake.  We spent years canning foods for the following years. When I was a teenager Dad got us a freezer. Wow less canning. Especially meats, were so, I thought tedious.

Funny how you carve things you do not any longer have access to.  Canned chicken was not bad at all.  Sorta like chicken soup with out the noodles. But it made great dishes when we used it.
I miss the canned Bing and Royal Ann cherries we used to put up.

Later in life, Dad got Mom a dryer.  So back to drying Apples, Pears, Plums, and other items of food.
I still hanker for a dried apple to chew on once in awhile.

Mom milked the cows by hand then with a milk machine later. I learned the same. Seems I was a teen when we got a milk machine to use. Mom had a crippling type of arthritis and her hands hurt to milk at that point. The most cows we had were 8 but not all milking at the same time some times only 3 could be milked because of calving. We were not a dairy.

(One reason for the move to CA. was because she had this disease and could hardly walk when we moved to California to my Aunt and Uncle's ranch. Dad milked for his brother - in - law and Mom helped Aunt Etta when needed. I was told she was here only a few months and had regained her ability to walk with out pain) Ironic was Dad felt better in Wyoming, as I do also. (My bones bug me here but not in Wyoming, Idaho or Michigan.)  My brother moved to Idaho for this very same reason.

We were a mini ranch and we had cattle, we also had some farm animals for our needs and once in a while Dad would sell some off to others.  The cattle we raised and sold often.

Mom was a 4-H instructor and taught Sewing and Cooking and Dad was also but taught Animal Husbandry. I had a Guernsey Calf , I raised to a cow. Cupid is a story of her own. I also had rabbits I raised and showed at the county fair.  We were pretty self sufficient family. Chickens are so smelly and the odor just never goes away. We had Turkeys every fall for the holidays. One year we had goose. Disaster that was, grease everywhere.

Mom was active at school events and supported the students and school activities. She later after the youngest one  (Dale) was in school several years, she worked at the Tomales High School Cafeteria. She loved the student interaction.

She truly loved the property that they bought. So sad family wasn't smart enough to keep it.
Apple orchards were planted, and new varieties created by  a previous owner.  Gravenstein apples were created on our land. I liked the apple before the Gravenstein.  Luther Burbank's gardens were on our land. Nothing like a fresh pear right from the tree. Or Blackberries from all the wild bushes.
Dad had planted some Raspberries and other trees. We even had a bearing chokecherry tree. Best jelly you ever tasted. They both loved Gooseberries and them growing there and rhubarb also.


Mom loved to visit family  in Wyoming and see her siblings as often as family could afford it. A sister moved to California from Oregon.  Her brother came from Wyoming and helped build the Dam that the spill way broke on. He was here for a short time but we were thankful to see him. Her older sister's daughter was in Hawaii when Fred and I were there so we had a mini reunion of : My Aunt Mae, Mom & Dad, Maxine's family and ours.  My Scott cousins came to visit us there also.

Mom and Dad were always very family orientated.  Something I miss and keep trying to instill into our children.

Mom came to our 50th Anniversary and stayed for five months and was getting her health back when she felt she needed to go check out the homestead.  We lost her 3 months later.

WE have a picture of her & Dad with family that is minus 5 grandchildren.  Dad died in 1995 so it had to be before his death. Nate was a toddler then.  No Kevin, Willkie, Alicia or Hannah, or Zack.

We we never got one of them all I  do not know. Should have been done at our 50th Anniversary party.

Here she is on the beach in Point Reyes, CA with her Mom. I think this was  1949 or near then. 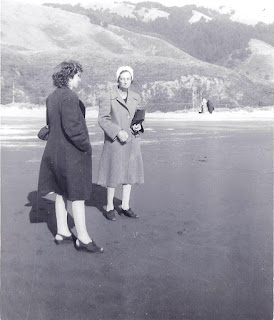 Blessed Happy Birthday in Heaven. We miss you.
Posted by Susi's Quarter at 10:13 PM