Mapping Our Lines The Jones Side

Hi everyone, over on my working blog this was posted today about Mapping your Ancestors.

Going to be trying this for the JONES lineage of my Dad's line.

Needless to say, the family scattered like seeds in the wind after getting to Illinois and Iowa.  They probably scattered like that a century earlier also, since I found a line in Georgia, early 1800's.

It makes sense to move about, the north's growing season was not near as long as the souths, why not move south to supply at least some crops for the north.

Jones line starts in Massachusetts from England and branches all directions. This is the Teague JONES  lineage.

First referencing to the area read about the development of the state. MA GenWeb

One of Teague's son went to Maine, now that could be many places north of the early colony developments.

The Young line that marries into the Jones line is found in Maine before moving west to Illinois and Iowa.

Teague's son and family, moved to Rhode Island with Roger William's group or at the same time at least.
They lived there for probably more than 100 years and some may still live in that region. Since I only tracked a specific line and a few collateral's to confirm my work, I suspect there is kin still in region.

Teague's great grandson then moved around a bit in Rhode Island and suspecting they were getting ready for changes due to the potential of War coming.  (One often wonders if they could sense that there was major distress coming).  Then they were found in Dutchess County, New York. Then they are found in Albany, New York, later to become Rensselaer Co and Saratoga and Washington Co. for children.  After my direct line Noel JONES,  born 1785 and has Noyes JONES 1809 Rensselaer Co. NY, tracking this line down to self was imperative for my Dad.  Only in the recent years have a  gone back and am trying to figure how they ended up in Dutchess Co. prior to Albany Co. It has to be a migratory route but it does not fit story. (Stories are not always correct, remember that).

After being in Rensselaer Co., Ny the family moves to Nunda, Ill, then to Nashua, Iowa area after the Civil War.  The boys of Noyes served in Ill, one dying in Tenn. one coming home after being nursed back to health to walk home.  I have not found data on the other siblings if they served. Nor have I looked hard for it yet, working the kinks out of the direct lineage.

After moving to Iowa, the family went north, west, south and some stayed in Ill because of marriage.

My Grandad moved to Wyoming with his wife and their son (my Dad).  My Uncle joined the Navy and was career man, his brother, my Dad as an adult moved with his wife and myself as child to California during WW11, actually the beginning of. He was to old to serve but did coast watch. The girls, (siblings) all married Army men and were all over during the War and afterwards too.

My siblings and I have covered a great bit of territory because my Sis and I both married Navy men. My older brother was Army. My younger brothers's son was in the Army and served in the recent wars.

Today my sister's grandson is in the Marines, one of her sons served in the Army in Egypt. One of our's, served in the Navy and was in the Mid East almost the same time as the cousin in Egypt. 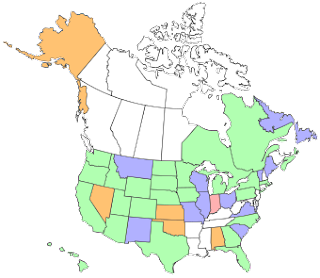 I see I forgot to mark Tennessee. I suspect that each state we have lived in since 1870. Calvin was in CW in Tenn with his sibling he left dead there. We have his papers.
Posted by Susi's Quarter at 3:01 PM