I did  not know my Great Grandfather but learned lots about him from his children. Calvin Fremont Jones born in NY and died in IOWA.  He left his brother buried in Murphesboro, Tenn area at the Battle of Stone River.  Was nursed back to health and then walked back home, to re-enlist and lose his pension, he fought to receive for 30 more years before getting. Lots of letters in his files regarding this mess.  He was buried and given up for dead was nursed back to health by black family and survived.
That takes lots of determination.

Then WW2 came along and I had my Uncles in the War.  My Dad wanted to go but had a family and was not young enough.  He was a Coast Watcher in CA. He is not listed as a Veteran but I think of him as one.  I remember he would leave every so many nights to go to the tower to watch the coast line in Marin Co. CA.

Then came Korea and I have Foulk Cousins who served which I forgot to list on that list, Ken, Klint and Keith all served either Army or Navy. Cousin Bob Morelli also served. (He was a  big brother to me as I grew up). Later  Don Morelli served in the Navy, as a Reservist. Cousin Lewis Jones and James Jones served in the National Guard during this time. I believe there were other cousins that served also. I did not know them then. Hartley Parrish and his brothers were in also. I did know him.
And Rich Hoffman who served Army.  Rich and Hartley and I used to set on the Hay Baler and listen to Grandad Hoffman tell us family stories.  Hartley's Mom was a Hoffman, sister to my Mom.
Rich's Dad was Uncle Roy.

Then came my husband in the US Navy as a career man. He spent many months away at sea, on a carrier, helping to keep the planes running and in good shape to win the war. A stalemate in the end.
He was blown off the carrier one time and caught the net on the outside. They found him before he fell into the sea.  He was aboard a carrier when the toe line broke and men were killed and seriously maimed. He watched pilots he knew fall off the carrier into the sea when accidents happened or the plane was so seriously injured they couldn't get it down on the deck correctly to catch it.
He flew on a plane that lost power and had to bail everything out of the plane in hopes of making it back to their home base. They did skimming water and I am sure with lots of prayer. Other planes had this happen and they had to pull survivors out of the water. My cousin was one of the survivors.
Don Heck, also my husbands dear friend and they grew up living next to each other.  We only learned years later that Don was my triple cousin on Mom's side. He resembled Grandad Hoffman and should have. He is also a Huffman/ Plants descendant as I am.  That Christmas picture was quite a treat.

Ironic, but Fred's family had lots of Huffman/Hoffman neighbors in Iowa. It was almost like destined to finally link when we met at  NAS Moffitt Field, CA.  I was working for the Navy at Westinghouse.

He designed a tool for the E 2 Hawkeye's that was patented by the Navy and saved them thousands of dollars. He was made SAILOR of the Quarter and was up for Sailor of the Year but was on sea duty and had no community service but  many months on the line keeping the planes up and the other person was on shore duty so he won. Never ever thought that was fair.  He was a ScoutMaster for the Troop here at home. He has a Life and Eagle Scout for sons. He did Community service when home.  He took the boys camping and hiking and taught them many things I wish every boy and girl could be taught to be prepared for what our future may bring us. Girl Scouts taught baking cookies my daughter knew how to do that and wanted to learn camping and fire building.  So she did not stay in Girl Scouts.

He still volunteers for the Fleet Reserve Association helping fellow members as needed.  It is a Military thing.  In the first picture he is with his friend Red at a FRA Event.

His ship would say 6 months and come home 12 to 13 months later, this was War.  He never ever had a true 6 months deployment. When he left we never knew when he would be home.

Later when he was aboard NAS Miramar, the planes had been brought from NAS North Island to NAS Miramar and he did a tour on the first Nuclear carrier the  USS Nimitz, sharing time with Dan J. doing his only tour in the Mediterranean Sea, all others were in the Pacific, Indian Ocean and regions west. One trip to Australia also. He liked Australia. He served on the USS Ranger, USS Oriskany, USS Nimitz, USS Ranger again, and other ships.  He was stationed in Japan, Guam, and other Islands in the Pacific.

It brought the War back to me full fold. The Roar of the planes sent chills up my spine.  When small we sat in darkness and listened to the planes leave the Valley and head our way to go over seas. You heard them coming for an hour and you watched them go for another almost hour out over the ocean to head to the Pacific Theater.  So the movie was the roaring again of those engines. The remembering the film clips at the Theater about the war.  The letters family sent with good news and some times very sad.  Two of my Uncle's came back and were in the hospital in San Francisco to recover to be able to go home.  Their wives, my Aunts stayed with us in Petaluma, CA. * Another Story*.

My Uncle's brother would buzz the ranch and do roll overs for us when we stood in the yard.
I remember the markings on the planes and being so proud to be an American and yet I was not yet five years old.  I remember when Uncle Gerald came back from Pearl Harbor and visited his brother my Dad.

Some how those wars I think made us a closer family, even if we lived in California, Utah and Colorado and Wyo and Iowa. 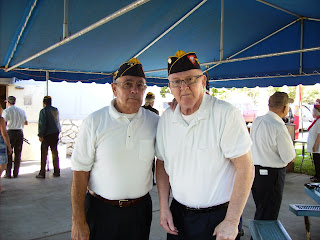 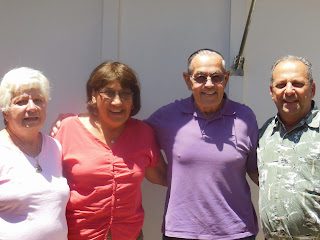 with Maria and Paul DiSenso 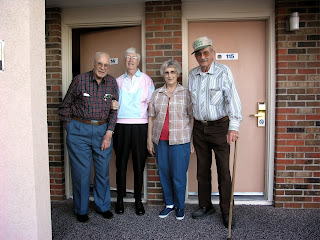 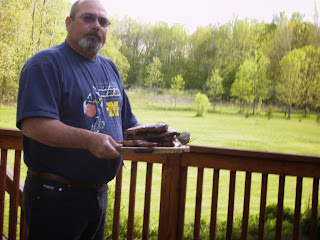