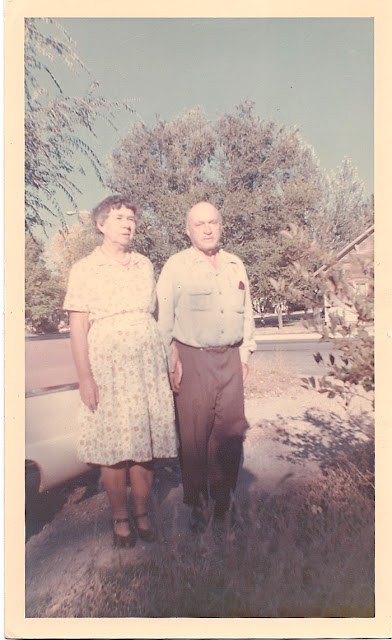 Harvey Edward Foulk was the father of  Claude Albert Foulk.
Margaret Mae Eastman was his mother.

Harvey and Margaret were the parents of 8 living children.
Claude being one.
He was a Great Uncle that I got to know well. He lived in Wheatland, Wyo.
near my Grandparents on the other side of family.
Great Aunt Edna made some of the most awesome meals when we visited.
I loved her beet jello salad.
He did lapidary work and other crafts.  He also owned a business in Wheatland for years.
He was born 28 Sept 1902 , Gales, Redwood, Minn.

Wish some one could find the video that was taken in IOWA for his 80th birthday.
I wasn't able to go but I understand a major group of my Foulk family were in attendance.
Uncle Claude played it for us when I last visited him.

Claude and Edna lost a boy in his preteens, according to my parents.

Uncle Claude was a relative that I think of often and miss more often.
He tracked the family until the Indian showed up then he quit and burned the book.
It cost him a pretty penny when he did that.
We ultimately had a long chat about this down in the basement the last time I saw him.
He was stunned about my thoughts on our Indian relatives and had thought a complete
different way than I did.  I so loved him and his wife.
I have a carved letter holder he made and gave me. Dad got some of his carvings also.