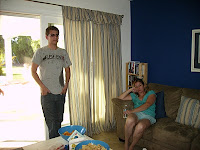 Many years ago, on a warm fall day a bundle of joy entered our world. He was our second born grandson.
He has a brother three years younger, who is also working on mastering his goals.
We are so happy, that he has made it to this stage in life and has succeeded in some of his goals. We are going to
watch him receive his Bachelor Degree, Tuesday morning at California State Northridge. He is working on his
Master's Degree also.

It is an Art's Degree and he is hoping to work in the film industry as other cousins have.

My first cousin Don Morelli's son Ric Morelli worked on the film ''THE RIVER RUNS THROUGH IT". He went on to become well known in films. He worked often with Robert Redford & others. RIc Morelli has become rather well known in the film circle amongst directors and producers so we are hoping that the same will come to our grandson.

We are biased, we like what our grandson writes to make into plays or movies. I suspect down the road his brother will be writing books and be well known also for he has a penchant to do some terrific writing also.


Here he is with his MOM at his Uncle's home.
Posted by Susi's Quarter at 7:16 PM