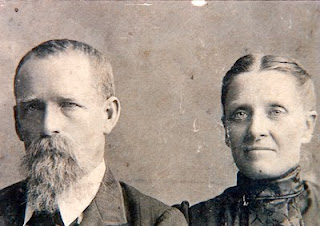 This is an early picture of Henry and Elizabeth Higgins HOFFMAN.  Henry was born and went to school using the name Huffman as the family had done for several years. But many years later, a child of his came home from school with information that HUFFMAN did not exist in Germany and the correct spelling was HOFFMAN.  He immediately changed his spelling to be able to get just his mail, not his cousins, nephews and other relatives using same name in his area. I have copy of letter in my files.

Henry and Elizabeth moved around a bit within the county. Henry was raised in the northern area near Washington Co. and they was in Aleppo area the last years.

Her father was near West Virginia border, sorta flexing back and forth.

Henry died 15 Sept 1879 Aleppo, Greene Co. PA  He designed a spiral staircase never used before that stood until 1992.  I have the newspaper clipping. It was a freestanding staircase. He lists himself a farmer on the census, But if you read his letters, he build barns, bridges, churches, houses and this unique
staircase.

The parents of 14 living (known) children. 2 died very young.  I descend from the son Sanford